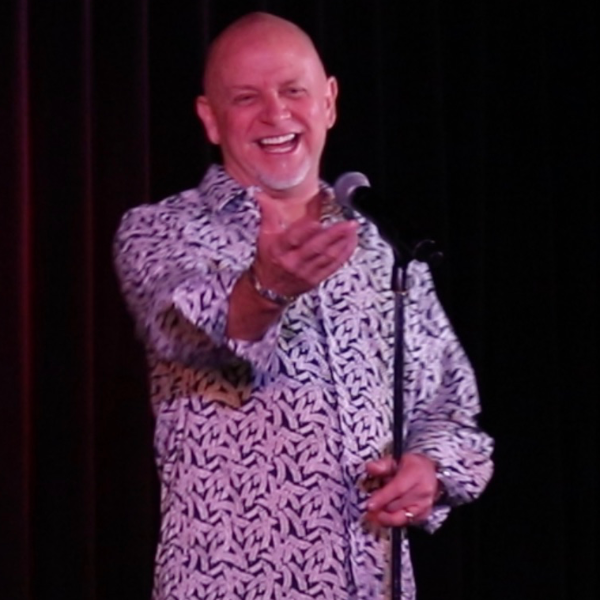 "Don Barnhart is hysterically funny, delivering his well-written topical material with an animated and improvisational flair that's not to be missed. He is a refreshing voice in the standup genre, mixing a blend of sharp, topical insights about our life and the world around us, pushing the boundaries of PC culture without being overtly offensive. Barnhart has often been compared to the sharp, witty insights of George Carlin with the animated expressions of Jim Carey."

We encourage you to come early and join us for dinner at The Freedom Beat Cafe or grab a beverage and a late night snack after the show and listen to live music with our BOGO drink offer. Just show your ticket to your server and get a Buy One Get One Free" beverage of equal or lesser value. (Valid only on the day/evening of show)

"Don Barnhart is hysterically funny, delivering his well-written topical material with an animated and improvisational flair that's not to be missed. He is a refreshing voice in the standup genre, mixing a blend of sharp, topical insights about our life and the world around us, pushing the boundaries of PC culture without being overtly offensive. Barnhart has often been compared to the sharp, witty insights of George Carlin with the animated expressions of Jim Carey."

Barnhart can be seen nightly performing his standup comedy at Jokesters Comedy Club inside The D Casino on Fremont Street. His new Dry Bar Comedy Special "The Spinal Disintegration of Man" is blowing up the internet going viral and he is the director/producer/star of Jokesters TV - The Late Night Comedy Show available on Amazon Prime and YouTube. You can also catch Don's family friendly comedy hypnosis show, Hypnomania, inside the Spare Room at The Downtown Grand Hotel, Las Vegas, NV.

For years, Barnhart has split his time touring the country headlining at the top comedy clubs, overseas entertaining the troops, performing for colleges and cruise ships. "Having a residency in Las Vegas has allowed me the freedom to really let loose and not hold back", added Barnhart who predominantly works clean, but isn't afraid to push the boundaries. "The main thing is that it's got to be funny!"

Barnhart is the author of the Amazon Best Seller, Finding Your Funny exploring the art, science and business of standup comedy. With a humorous and heartfelt forward by Comedy Legend George Wallace, Finding Your Funny goes beyond Barnhart’s own 25-year journey and shares the brutal, often overlooked experience and advice of other comedians, entertainers, managers, agents and bookers. The book includes a no holds barred assessment about what clubs, venues and agents are actually looking for as well as many of the things you need to do and avoid if you’re looking into making comedy a career.

Don's newest book, Rock Bottom is the story of Returning Veteran Guy Derek who comes home from the war only to find out his wife has left him, his house is foreclosed and ends up homeless. Using his wit and humor Guy finds his way back becoming the Robin Hood of the disenfranchised. The book is getting great reviews and is being turned into a feature film.

Since 1992, Don has been producing and performing comedy shows for the troops and is one of the stars of Jordan Brady's documentary I Am Battle Comic exploring the importance of entertaining the troops around the world. Barnhart also stars in Finding The Funny with Brad Garret and Louie Anderson and plays a rather disgruntled, road weary and carefree comedian in the upcoming comedy film, Tribute To Fluffy. Don can also be seen playing a psychotic mad man in the new web series Max Justice.

Barnhart has been seen on MTV, Star Search, and Evening At The Improv and has been featured on ABC, CBS, FOX and NBC. Barnhart is a Bob and Tom Show favorite and his comedy CD, I’m Not Just Eye Candy can be heard frequently on the comedy channels on XM/Sirius Satellite Radio. In 2015, Don was the grand prize winner in the Levity Entertainment/Improv Comedy Contest and was the Grand Prize winner in the 2008 American Idol Underground Comedy Contest. In 2018, Don's Jokesters Comedy Club won the Best of Las Vegas Silver Award for best comedy club category. Recently, Mayor Goodman of Las Vegas proclaims August 31, 2019 as Jokesters Comedy Club Day on the anniversary for its 1,000th show and congratulations him on this milestone!

In his off time Don Barnhart teaches stand up, improv and comedy writing at The Las Vegas Comedy Institute.